How to conquer your fears and anxiety by labeling your emotions 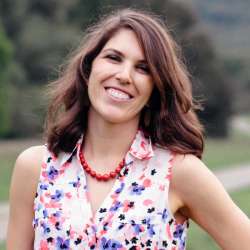 Sweaty hands, racing heart, lightheadedness–are these feelings familiar to you? If you are afraid of public speaking, these sensations are probably the ones that overwhelm you when you speak up in a meeting at work, give a presentation in class, or give a speech at a wedding. Or maybe you are one of the many people who avoid public speaking altogether, much to the detriment of your work or school performance, or the frustration of your friends and family. As odd as it might make you feel, you are definitely not alone. In one study, 34% of people reported they were "much more nervous than other people" about public speaking. 1

We know from research studies on anxiety that the best way to tackle your public speaking fear is to face it head on–to get out there and practice! 2 However, there might be even more you can do. In a recent study I led at the Anxiety and Depression Research Center at UCLA, we found that in addition to practicing public speaking, identifying the emotions you experience while practicing can lead to even greater reductions in anxiety.

Identifying Your Feelings Before You Practice Your Speech Can Help

In our study, which was published in the journal Behavior Research and Therapy,3 we recruited college students and members of the Los Angeles community who reported severe anxiety and frequent avoidance of public speaking. To get a baseline assessment of participants' anxiety levels, we asked them to give a speech in front of an audience while we measured their heart rate and perspiration levels. These measures provided an objective assessment of each participant's anxiety level, more so than simply asking participants to report how anxious they felt.

We then assigned participants to one of two groups. In one group, participants practiced giving many speeches in front of a small audience, which we know from prior research helps to reduce anxiety. In the other group, participants practiced speeches, but before each speech, identified the emotion they were feeling at that moment, such as, "anxious," "nervous," or "afraid," by choosing from options displayed on a computer screen. Participants also identified what they feared might go wrong during the speech, such as, "the audience will laugh at me," "they will think I'm stupid," or "they won't like what I'm saying."

We believe that our research findings can be explained by what happens in the brain when a person labels his or her emotions. For example, when you put your emotions into words, you activate areas of the brain including the right ventrolateral prefrontal cortex, which is involved in controlling negative feelings, such as anxiety. We believe that by including emotion labeling alongside your public speaking practice, you are actually exercising this area of the brain, which helps you reduce your anxiety response. There is growing evidence that people with anxiety disorders have difficulty activating brain regions involved in controlling anxiety. Treatments that specifically target these regions' capacity to down regulate negative emotions may be correcting this deficit.

Observe How You Feel and Label it!

You may be reading this and thinking to yourself, wait, that doesn't sound right. Telling myself that I'm feeling nervous will actually make me less nervous? But the answer is actually, " Yes!" Most people do not believe that labeling a negative emotion without trying to change it will make them feel better, but in many different studies, researchers have found that this is in fact the case. 4, 5, 6, 7, 8 For example, when people view graphic and gruesome images and then label some aspect of the image or their emotional response to it, they report a reduction in distress, even if they predict that their distress will increase as a result of labeling. They also show a corresponding decrease in brain activity in regions related to the experience of negative emotions.

Through these studies, it seems that science is starting to suggest that trying to look on the bright side or push away negative thoughts and feelings by replacing them with positive ones may not be the only way to improve your mood. Modern therapies (often referred to as "third" wave therapies) draw from Buddhism and employ mindfulness practice to promote a new way of thinking. The goal in these treatments is simply to become more aware of your thoughts and feelings, both positive and negative, and not to try to change them. The finding in this public speaking study seems to align with this new (yet, old) way of thinking. The goal is to notice, identify, and label the negative emotions and thoughts that plague you when you get up in front of an audience––without trying to change them.

Our research findings are easy to put to use. Here are some tips for tackling your public speaking anxiety by combining emotion labeling with practice:

Start by standing in front of a mirror and giving a short speech about your favorite food or sport. Then ask a friend or family member to act as an audience member. Set a goal to speak up in your work meeting or in class 3 times a week. When you are ready to go even further, plan to give a speech at a wedding, do a work or school presentation, or attend a Toastmasters meeting. Toastmasters is a national organization that provides a setting for people to practice public speaking. Practice as often as you can, and aim to seek out and take on public speaking opportunities instead of avoiding them.

2. Before Each Practice, Label Your Emotions and Every Possible Pitfall

Before you get up to speak, write down the emotions that you are feeling. Do you feel afraid, nervous, panicky, anxious, terrified? What are you afraid might happen while you are speaking? Will people laugh at you? Might you make a mistake? Could you forget what you wanted to say? Write down as many negative emotions and possible negative outcomes as you can–the more the better! Do not focus on the positive; focus on the negative! Then, get up and speak.

3. Don't Let too Much Time Pass Between Practices

After one practice, you may feel so overwhelmed that you decide that it might be best if you take a break and wait until next month to practice again. However, it is more effective to practice consistently without letting too much time pass in between. Setting a goal of three or more practices per week would be ideal. Even if you feel very anxious while practicing or haven't noticed any improvement in your anxiety level, it does not mean that this method isn't working. Keep working at it, and giving a speech will get easier.

Anxiety-Free Public Speaking is Within Your Reach

It is extremely common to feel anxious while public speaking, but there are many things you can do to reduce your anxiety. As suggested above, find opportunities to practice your public speaking, and do not shy away from anxious thoughts and feelings. In addition to trying the tips above, you may benefit from working with a therapist who is knowledgeable and experienced in using Cognitive Behavioral Therapy to treat anxiety disorders.

Keith Whipple, MA, RDT from Institute for Therapy through the Arts
686 Likes

Do You Have Social Anxiety? Are You Anxious In Groups?

5 Reasons Why Anxious Children May Be Liked Less